You are here: Home / Experiences / Outdoors / Tesnatee Gap To Unicoi Gap On The Appalachian Trail 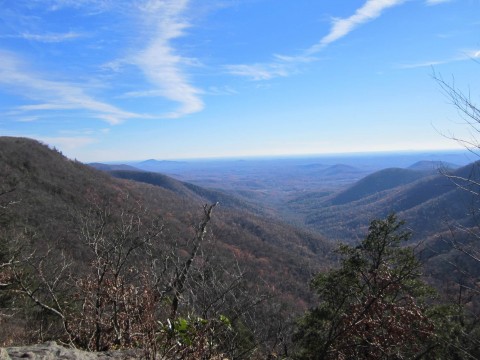 The last time my brother, brother-in-law, and I hiked a section of the Appalachian Trail – it was an absolute fail. You can read all about that adventure hiking the 5 miles from Neels Gap to Tesnatee Gap in A Bear Walks Into Camp.

But that was back in August – and despite everything that went wrong that time – we’re still hooked on the AT, and want to keep section hiking it.

We’ve done Woody Gap to Tesnatee Gap so far – so we decided to do the 15 or so miles from Tesnatee Gap to Unicoi Gap via Hogpen Gap northbound next.

And we decided that we wanted to do it in November.

This time around – we knew that we needed the right equipment. So with the help of some friends at work, and the rental facilities at UGA GORP – we got a hold of some actual hiking gear that we should have had last time such as legit backpacks (not classroom Jansports), a tent, 3 season sleeping bags, an Appalachian Trail Data Book, a burner, pots, a better bear-bag rope, and a much better selection of food.

Maybe we were just due for a good experience after the last trip, but this one went much better.

The trip was nearly idyllic. You know, the kind that you see on commercials and such. That kind.

It was awesome – with the exception of a 2 incidents in the night – neither of which would’ve been notable except for the fact that I now think that pretty much every sound in the forest is a bear. I’ll get to that in a moment.

The hike from Tesnatee Gap up to Hogpen is 350 feet pretty much straight up – the good news is that there are plenty of amazing overlooks (see above).

We started hiking around 3pm. We knew we wouldn’t make it to the Low Gap shelter – so we started looking for an established campsite.

There were a lot more in this section than is noted in the data book – but they are actually pretty sparse before Low Gap. There’s one right after White Oak Stamp in a little mini-valley that we passed over (it was 4:25pm – so we hiked on).

We ended up at a a spot about 30 minutes onward on a ridge right before Poor Mountain.

Other than not having a bear walk up on us in broad daylight – not having to deal with rain makes a huge difference.

Not having rain in the evening allows you to make a fire (mesmerizing, warming, and fun), to eat outside and move around, and pretty much just not be miserable.

But just because everything is all idyllic and not miserable doesn’t mean that camping in the backcountry doesn’t take getting used to.

And despite having a tent, a party of 4, warm clothes, knives, and checked off all the camping tips from experts – sleeping in the mountains is still freaky – especially with no blissful ignorance.

Because the Trail in the late Fall is dead silent at night – no bugs, no tweets, no nothing – you tend to hear everything.

I’m laying there with my hyper-active agent detection running full-on and ready to start warding off various fauna and imagining things worse to deal with than bears – like wild boars, coyotes, or ticks.

I freak out. I’ve got no plan. No weapon. And I can’t even get out of my sleeping bag. I do the next best thing and wake everyone up.

Turns out it was just a deer. I really unstable fawn. Still. For a minute it sounded like a bear pulling out bear bag down.

Then, at 4:00am Matt wakes me up to hear some other annoying animal sniffing and shoving against our tent.

We decide that it doesn’t have the breathing of a bear (not that we have any idea) – but it could definitely be a wild boar looking for acorns.

So while I frantically try to think through how to defend against a wild boar (ie, you don’t)…my Dad and brother roll back over and decide to just die.

Turns out it was just a racoon. The lesson is that if you are going camping for the first or second time – don’t expect to sleep.

And I have the greatest amount of respect to thru-hikers who do it day in and day out.

From Poor Mountain to Unicoi Gap

The trail continues up and down several gaps and stamps. It’s a really beautiful walk – even though there are no grand overlooks like you’ll find between Woody and Hogpen Gap.

There’s a brand new and really awesome shelter at Low Gap about 3 miles past Poor Mountain with water, and a nice view of the small valley.

The only disappointing part about this section is all the work you put into climbing and walking around Blue Mountain…without ever summit-ing it and getting the amazing views that you get on Blood Mountain.

Instead you get a not too fun hike over lots of granite rocks and steps around Blue Mountain and its various hollers and ridges.

It’s really quite tiring, but it’s still a nice walk at times.

There’s a nice shelter on Blue Mountain with great views, water, and a spacious camp area.

After the ascent onto Blue Mountain, you walk on ridges around its peak until you begin the rapid descent (as in 1000ft in 1 mile) to Unicoi Gap.

And, of course, if you are hiking southbound it’s all the reverse.

Overall it was a good section with good times.

We have Springer Mountain to Woody Gap, Unicoi Gap to Dick’s Creek, and Dick’s Creek To North Carolina left in Georgia.