You are here: Home / Experiences / Outdoors / 6 Pros and Cons of Commuting and Getting Around by Bike in Atlanta 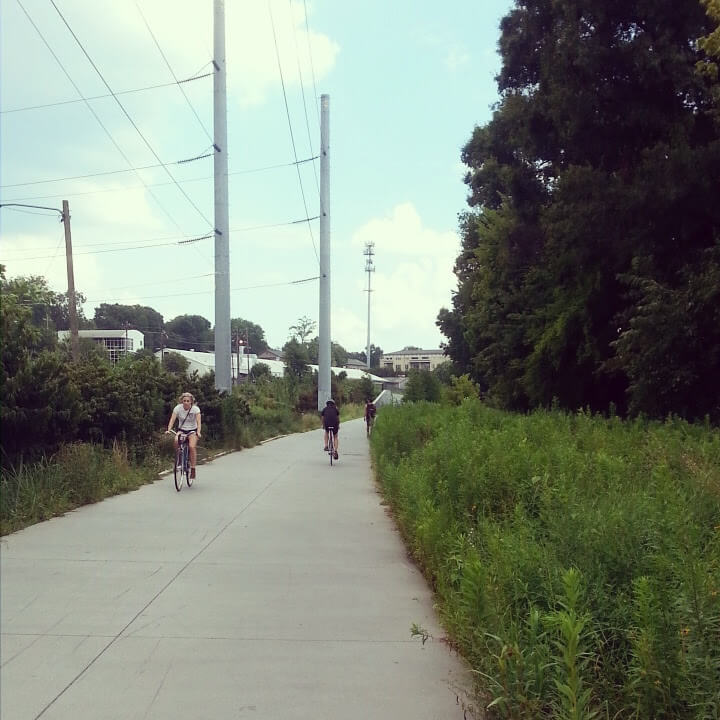 I had loved Athens’ bike-friendly culture (though not its very bike unfriendly hills). I used to bike nearly everywhere in Athens, and wanted to keep up the same biking habit in Atlanta.

I’ve had been a bit over 2 weeks, but had already started taking MARTA to work, and biking home – while also biking around the city for the sake of exploration and exercise.

So – for anyone who was curious about biking in Atlanta – a famously car-only, traffic clogged city  – I wrote up this pros / cons list.

I’ve now lived in Atlanta for several years. Since 2013, I’ve moved neighborhoods (from Buckhead to Grant Park) and changed jobs.

I’ve gone through 3 different commuter bikes and changed my commute pattern several times. The City of Atlanta has continued dropping a bit of cash on better bicycling infrastructure and has even appointed a “Bike Czar” to coordinate efforts to improve cycling around the city and started a bike share program.

In other words – a lot has changed. But I’ve stuck with bike commuting the whole time. Right now, my commute is from the south end of Grant Park to Downtown.

My list of pros / cons remains the same – but I’ve updated the post with new comments & observations.

Pros of Commuting and Getting Around by Bike in Atlanta

Lots of Streets and Cut Throughs

My guess is that Atlanta doesn’t compare to New York, Philadelphia, or even Los Angeles when it comes to street connectivity, but it still offers plenty of options for planning a route from A to B (again this is all inside the Perimeter).

One of the big advantages of biking in a city is that you can travel down side streets and cut-throughs faster than cars, while staying safer than on the main highway. In Athens, and many other cities (especially with rivers) – there’s only 1 route to choose from.

Atlanta has some degree of the problem of chokepoints with railroad and Interstate crossings (see cons below), but so far I’ve been really impressed with being able to plan safe, fast routes.

You can take your bike on all MARTA buses and trains. This bit is huge. MARTA is one of only a couple transit systems in the US that allows unrestricted access with your bike. And kudos to MARTA for that.

It increases your bikeable radius by a huge factor, and makes it easy to pick and choose your commute for that day.

For example, last week I had a meeting in Buckhead that was too far to walk to from the Buckhead station – but was also too far to quickly bike to. The simple solution was to take my bike on the train and bike the remaining mile to my destination.

I also don’t have to worry quite as much about getting stranded if I have a break down – there’ll always be a bus along.

Note – you do have to be quick going through the MARTA turnstiles, and careful when you board the train.

Atlanta was and is a railroad town, and over time, quite a few railroads have fallen out of use. Rather than letting those rights-of-way, bridges, and level grades go to waste, Atlanta has begun this really cool project of ripping up the railroad tracks and building a 10 foot wide concrete path in place of the tracks. The old railroad tracks, combined with other public rights of way, are going to eventually for a full loop around the city of Atlanta.

Making Atlanta serious bike paradise. There is nothing so perfect as biking on a path that is separate from traffic and at level grade. Other watching for pedestrians, it’s like having a bicycle I-85.

So far, Atlanta has only built 2 sections – one on the Northside, and another on the Eastside…and they really are all that. I’ve biked both of the them – and are by far the best bit of infrastructure you could ask for as a cyclist this side of Copenhagen.

Here’s how the BeltLine currently exists in the Southeast section near my home. It’s currently under planning to be completed within a couple years.

Other cities have similar infrastructure (Athens has a Greenway along the Oconee River, and is building a bikeway to the Athens Bypass), but no city that I’m aware of has anything this extensive planned…and it actually goes places that you need to go.

Atlanta isn’t Kansas-flat by any means, but it’s also not San Francisco-bike-commuter-killer hilly either. I came from Athens, GA where hills are what scare off most curious cyclists. And I don’t blame them. If you are a freshman at the University of Georgia, the last thing I’d want to do is bike up Baxter Hill everyday.

While Atlanta has some rolling hills, I’ve yet to encounter anything that has me off my seat – or even in 1st gear for that matter. A huge pro for biking.

Every arterial road in Atlanta is clogged all the time. It’s one reason to get out of your car and bike, but it is also counter-intuitively helpful at times. Here’s why.

First off, it provides a bit of schadenfraude. Every cyclist loves it a every driver loathes it. It’s that feeling when traffic is backed up and there’s a bike lane…so the cyclist keeps passing everybody, and getting places faster. Annoying if you’re driving, and a shot of joy if you’re cycling.

But seriously, the heavy traffic does slow everybody down, which makes biking on major roads much safer. Peachtree St is so clogged and slow anyway that most drivers don’t care if you are cycling along. Northside Drive is not safe at all outside of rush hour- when it suddenly becomes ok.

Lastly, the City of Atlanta puts out a lot of public support for cycling. Cycling is an integral part of their “transportation puzzle,” and they put down the cash and press to make it known. In addition to annual budgets, the City voted to top up bike infrastructure spending by $2.5 million in addition to the annual budgeting. The Mayor has put the BeltLine on the “fast-track” and the Clean Air Campaign is always trying to get more people to bike.

Even if the spending doesn’t turn Atlanta into Copenhagen overnight, all the extra press and support does help commuting cyclists to not feel like an enemy or other (all to common in American cities).

Cons of Commuting and Getting Around by Bike in Atlanta

Atlanta has an infrastructure maintenance backlog of almost $1 billion. I don’t know the details of what is in that backlog – but I do know that the streets around here are not in as good shape as Athens, GA.

Atlanta is making huge progress tackling it with the new RenewATL bond program – but some streets are in pretty rough shape.

On one hand – I don’t want to complain too much, because Atlanta is fabulous compared to many major American cities. But on the other – it’s definitely fair to warn any prospective bike commuter that your bike is going to take some wear and tear getting around the city.

And the wear and tear isn’t really the main issue of bad roads (“big” maintenance bills for a bike are about the same as a car’s oil change) as much as safety. The worn down asphalt along many streets forces you far out into the road, and forces you to really pay attention to when you have to swerve.

In a car, you won’t really notice a worn down road until it’s really bad, whereas on a bike, you’ll notice every little rumple. So Atlanta – fixing potholes should be just as much a priority as adding bike lane striping.

Yes, Atlanta traffic was a pro…but it’s also a real pain. You can’t shortcut every street, and without a bike land, it’s really bad form to zig zag to the front of a traffic light every time.

And the traffic is everywhere, most of the time on key streets – and particularly Downtown. You have to be keenly aware of traffic flows & cross-patterns to avoid bad situations (like getting stuck on Courtland St at 4:45pm)

Urban planners talk about how urban freeways divide and damage the “urban fabric” of a city. I took Urban Geography in college, so I get the theory, but it never really sank in until I started biking around Atlanta.

The Downtown Connector & I-20 kind of remains out of sight…until it doesn’t. And when it gets in the way of your route, you are kind of stuck. It creates massive choke points like a river, and creates some of the more awkward intersections to navigate.

Every major American city has them – and there’s no getting away from them, but coming from Athens – it has been interesting planning around them.

On the flip side, biking in winter is not that bad.

I’m sure there’s a really good reason behind the traffic lights around Downtown Atlanta – but they are absurdly long, and the sensors do not pick up cyclists. I’m generally a traffic law abiding cyclist (even though I do think Georgia should follow Oregon and create bike traffic laws distinct from cars), but the traffic light timers create a huge temptation and a huge delay.

Again – like the potholes, Atlanta is making enormous progress with the RenewATL infrastructure bond. But as it is in 2016 – it’s still a challenge.

And none of them are helping the perception of cyclists among non-cyclists.

The guys on the sidewalk are always about to get hit because turning cars can’t see them, and they are scaring people off the sidewalk.

The competitive guys are blocking whole lanes of traffic and are generally annoying to everyone.

And the other guys just make cyclists look bad – because no matter what people will always stereotype.

So despite the PR and city efforts – even if you are a law-abiding cyclist – you will probably be put in a stereotype bucket with all the rest of these Atlanta cyclists. You’ll probably get honked at, or have an engine revved at you. But whatever. Perceptions won’t change until more people start biking everywhere.

That said – it has been interesting to see how perceptions do change. So much of my initial observations were around Buckhead & Midtown. My commuting pattern now goes right through Georgia State University. And around there – there are plenty of law-abiding cyclists coming and going from class.

Drivers are used to them – and fairly cool with them. I’ve had much fewer incidents since moving to a more bike friendly area of town.

Go and try it yourself! You can read more about basic bike safety at Atlanta Bike Coalition.

Trying it for one day is the only real way to get a perspective on what bike commuting in Atlanta means for you. It’s a challenge to get started but totally worth it in every way.