You are here: Home / Experiences / Outdoors / Observations & Training Tips from My First Trail Half Marathon 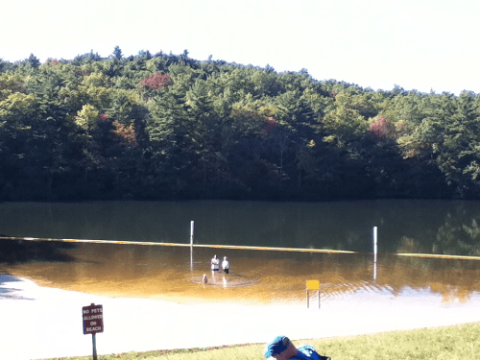 Previously, I had run in 2 competitive road half marathons, 1 marathon, several half-marathon distances on my own during training or recreation. I’m a middle of the pack runner and finished 34th out of 108 in the Mystery Mountain race.

Here’s how I did my trail half marathon training, and some observations on what exactly a trail race entails, what to expect, and how to prepare…

Obviously the core differences between a trail half marathon and a traditional road marathon are that you run on a…trail, and you typically run through mountains.

I, however, did not expect the differences to be so extreme.

In the past whenever I ran “trails” it was always along rivers, through forests, etc. Maybe I’d throw in some rolling hills.

I had expected to run along a trail for sure – but a typical running trail where you have plenty of room, maybe a few roots, but overall more preferable to a road because it’s easier on the knees and prettier to run through.

The trails were much more akin to the Appalachian Trail – a foot wide, covered in roots, frequently broken up with granite boulders, and never consistent.

The problem was that I spent a lot more mental energy making hundreds of little decisions constantly such “should I step on this rock, or that rock?” or “should I pass this guy on the left or the right?”

Those little decisions made the mental challenge very different from a road race – where the main goal is to keep a zen-like concentration of keeping your pace for flat, boring miles on end.

The reward, of course, was that there was never a dull moment on the trail half marathon. There was always something to distract me from the pain or the temptation to stop. There was always another creek to cross, a rock to jump off of, or runner to pass.

Quick aside on passing runners. One indirect problem of narrow trails was that there was never a good place to pass. 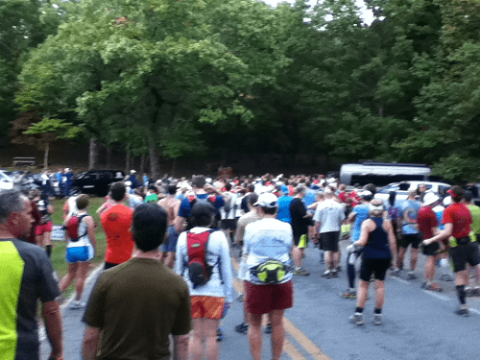 That lead to tricky situations. You can see below how we all got bunched up on a really steep incline (and stopped long enough for me to snap a picture). 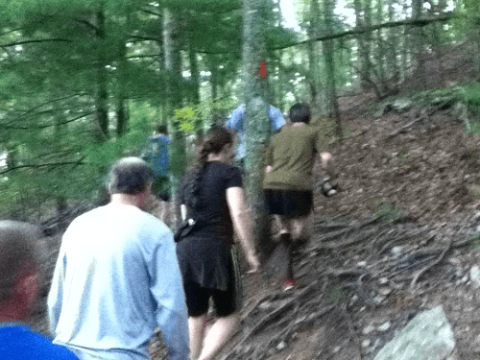 I never did figure out the race etiquette. At mile 3, I got tired of the traffic and courtesies and just started announcing “on the left” and leaping into the leaves/dirt/boulder to pass.

I also learned that you gain time and pass people by letting loose on the downhills, and bursting the last little bit of uphills.

It’s really nerve wracking (but also adrenaline-inducing) just letting loose on downhills – but I learned you can make up real time without losing any energy if you run full speed downhills and just let gravity do the work for you.

This leads to my 2nd unexpected problem from running a trail marathon over a road marathon: the extremes of the uphills and downhills.

Like I’ve said – downhills are a very underutilized opportunity especially for anyone who doesn’t care about running off a mountain. But it was my overall pacing that the change in elevation really affected.

In the past – with any road race – I always had a target pace that I had trained for, and knew I could set a target personal best with.

Any idea of a “pace” simply does not exist on a trail half marathon. There’s only going as fast as you feel like you can – whenever you can.

Setting the traffic jams aside for a moment (which really affect things in the beginning) – every part of the course is messing with your idea of pacing.

The uphills are awful – it’s more like glorified hiking. Actually, it’s really just hiking. There was a hill where I was grabbing trees to pull my way up it. Even ones where you can theoretically “run” – it’s vastly more efficient to stop and speed-hike.

For runners who value “not stopping” – it’s a bit of a killer. And one thing that really affect how you train for a half marathon, which I’ll get to in a minute.

The downhills are awful in their own way too. If you can summon the courage (err, recklessness) to sprint down them – it’s not really anywhere near a sustainable pace. And if you tap the brakes on the way down – you’re just losing time from coming uphill.

The flats are also killer to any sort of pace…because you have so much time to make up for from the uphills/downhills that you have to go. And anyway, you’ll probably have to cross a creek, jump a tree, tip toe through broken granite, or stop and gawk at a jaw-dropping view of the leaves changing in the Blue Ridge Mountains (seriously).

But how does all that affect training for one? Here’s tips I wish I had known beforehand:

Quick aside on trail marathons. I originally registered for the trail marathon – not the half. I was talked out of it by my wife and running friends. And that was a good thing.

If you are considering a trail anything – do the half (or less) first. It’s a very different beast than a road race. From what I could tell from the marathoners during and after the race – it’s more like a speed-hiking for all but the top tier runners.

They ran with (and trained with) running backpacks, extra water, and first aid kits – since they did a 10 mile section with no aid station. I would’ve up the creek and out of gas if I had tried to tackle that with the training that I had put in – and not knowing what I know now.

That said – if you are looking for a challenge outside the traditional road race, a trail half marathon may very well be up your alley. It seemed to especially appeal to people who were hikers first – but also enjoy running (over people who love to run first, but also like hiking). 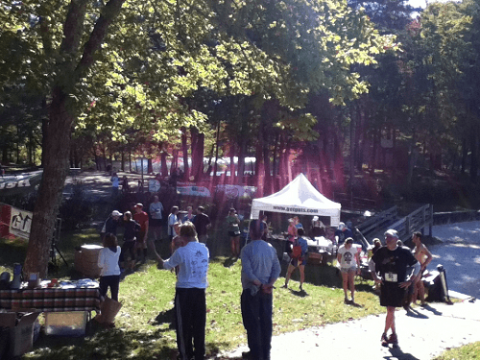 And kudos to the Georgia Ultra-Running and Trail-Running Society (GUTS) for putting on a fantastic race at a great location.