You are here: Home / Experiences / Travel / On Riding Indian Railways 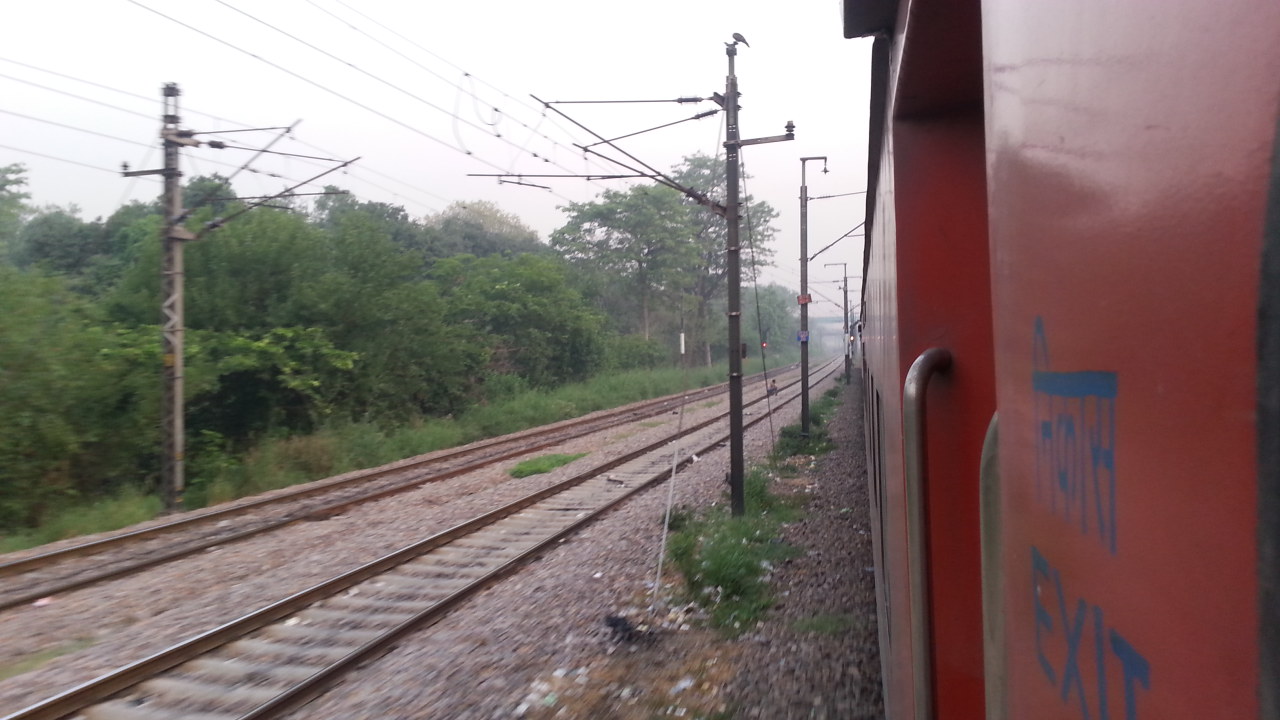 When I traveled to India, we flew into Bengaluru for my sister’s wedding. But we also wanted to make our way to Delhi to see their house and do some sightseeing.

We could have simply flown. But when you only have a week in a country – what better way to see the physical country than a train?

Plus – there are few, if any, rail systems as famous as Indian Railways. They were the crown jewel of the British and India has used them to physically and symbolically tie the country together since independence.

And not only is there the romance of train travel – but Indian Railways has even more romance as the setting for a section of The Great Railway Bazaar and trains such as the Maharaja Express.

Either way – I wasn’t going to visit India without riding a train. So here’s how the experience went down.

We traveled on the Rajdhani Express from Bengaluru to Nizamuddin Station in Delhi.

It’s known as a really nice train. It’s well-maintained, well-ridden with good on-time performance. It’s all-electric all the way with good rolling stock. Here’s our car and the rest of the train at a station.

We rode second class – so our berth was not fully-enclosed. But it did have A/C, room for 4 adults and a curtain for privacy. The accommodations were basic, but fine. Here’s my sister Hannah on a folded out upper bunk at night. Note the basic sheets, pillow and space for stuff while sleeping.

Here’s the bunk arrangement during the day. The upper bunk folds up so that you have a couple benches for sitting/lying.

The berth was tight, but good. The window is sealed since second class has A/C – so you watch the countryside roll by like a movie set.

If you have motion sickness – I don’t recommend the upper bunk. But I found the swaying to be fine. If you are more than 6′ tall – beware that your feet may stick out the curtain.

The bathrooms were clean-ish but carpet-bombed with ammonia and cleaner. You also have to develop some train legs quickly to make use of the bathroom. Here’s me attempting to brush my teeth while rolling at 80+ mph.

The food was…ok. It has the same reputation as airplane food in America. It’s safe and passable – but nothing to boast about. They bring 3 hot meals per day plus snacks and tea. So you won’t starve by any means, but you may want to bring flavorful snacks and/or talk to the station vendors.

Our route took us from Bengaluru to Delhi via Secunderabad, Nagpur and Bhopal. Here’s our train boarding at Bengaluru at night.

The train is the 2nd-fastest on Indian Railways. While it’s nothing like a Japanese or European high-speed train, it’s definitely faster than most Amtrak trains in the US.

The train usually slowed outside of towns during the day, but moved at a good clip during the day outside the city. And at night – it was positively flying. It apparently hits 81mph on some sections.

Here’s what it looks like out in the countryside.

We had a couple major stops during the day – such as those in Secunderabad and Nagpur. Both of those stops are not very notable – except for being obviously heavy industry cities with the pollution to match. Nagpur especially seemed like the Cleveland of India (no offense to Cleveland-ers or Nagpur-ans – I’m sure there are lovely parts – I’m just operating on city stereotypes here).

We stopped for a while in Bhopal – though it was at night.

It was one of the few cities that I recognized – albeit infamously.

There wasn’t much to do at each station except to get out and stretch. There were usually a collection of vendors with food, drink and reading material. I recommend picking up an English-language newspaper. It’s like a little window into the culture.

I also recommend picking up a paper map. At each station, you can see the different trains headed in different directions. Their routes are posted on the outside in yellow. Matching the cities with the map helps provide some scale and orientation within India.

Here’s a shot of a night stop with some non-A/C cars in view. The bars are disconcerting to see – though apparently in place for good reason.

After rolling for quite a while, we pulled into Delhi’s station at 5:30am. The sun, crowds and pollution made for an…interesting…sight.

We had a super-porter in Delhi who took us quickly through the chaos to the station entrance. From there, we met our driver who took us on sightseeing.

Indian trains are slower than flying, but also a very effective way to see & understand the scale of India in a short period of time.

A/C class is worth the price. But traveling in 2nd class with curtains was a good balance for privacy, safety and staying engaged with people (especially little kids who apparently dare each other to go check out the Americans).

Be prepared for tips – especially the cleaning/food guys and porters. They did a good job (for us) keeping our cabin clean and stocked with food & boiling water. As with any travel in developing countries – don’t awkwardly overpay but don’t cheap out either.

Have plenty of small change for vendors at stations. They’re your only real chance to get something cold to drink, so take advantage of it.

Bring motion sickness medicine – even if you aren’t usually at risk in cars or boats.

Bring a set of mini chains and locks. There are steel loops underneath the seats to lock up luggage. The chains won’t stop someone who is determined, but they will keep a curious/honest man straight.

Otherwise – bring whatever else you need to stay seated and entertained for hours on end. The journey is all of the fun!

Read my post about traveling in India and seeing Delhi’s sights.