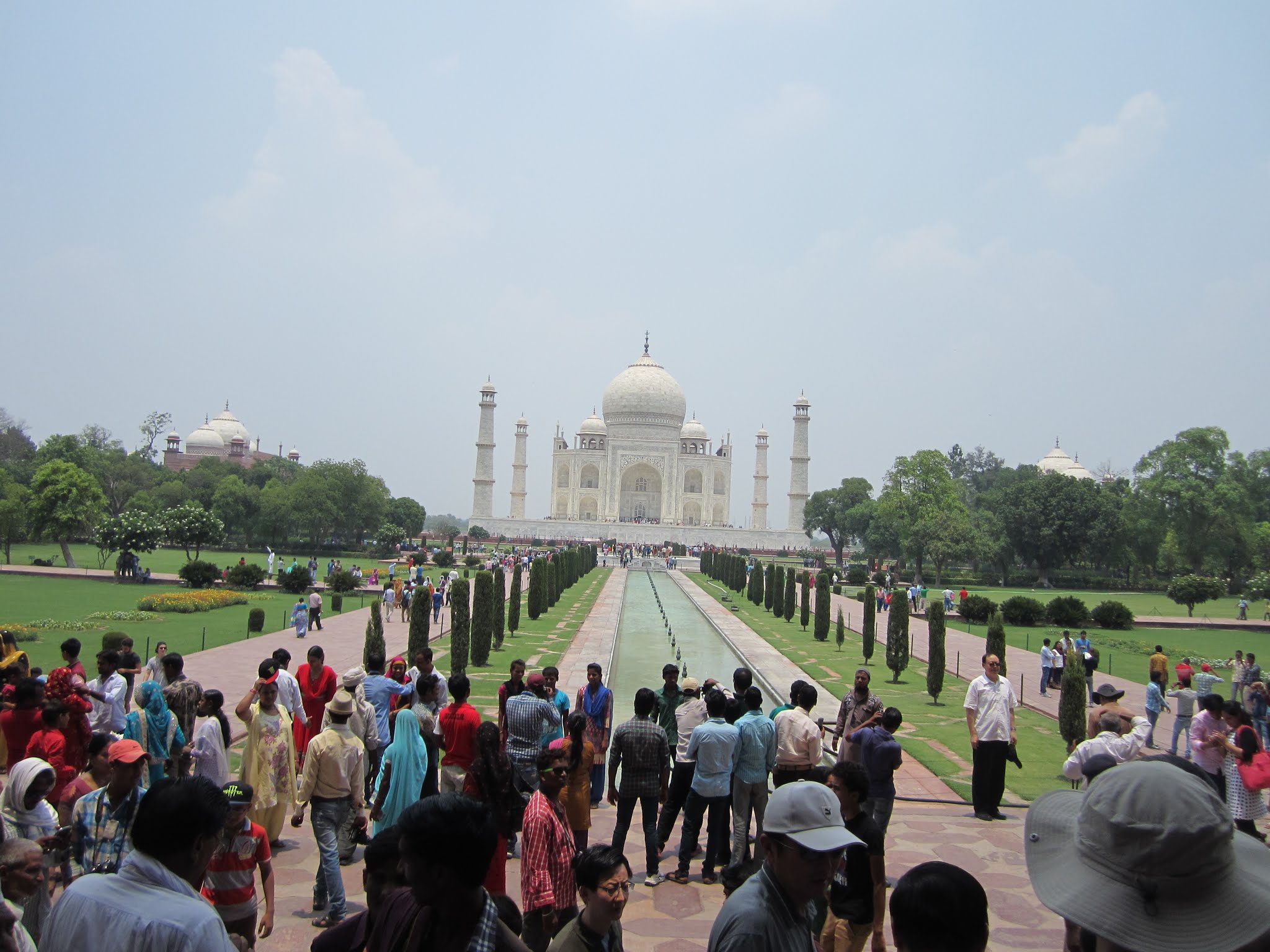 My trip to India was spent primarily at my sister’s wedding and on the train to Delhi – but since we had the last few days in Delhi free, we got to see some of India’s Big Tourist Attractions.

India is an enormous country with more history than you could see in your lifetime. But – most of their world-famous tourist sites are all located in and around the Delhi to Agra corridor.

On our first day, we did a grand tour of Delhi’s attractions. The next day, we drove down to Agra to see the Taj and Red Fort.

Our first stop (at 6am due to our train schedule) was at the India Gate. I was not overly familiar with it – but had heard of it since it’s the site of many of India’s national celebrations. It also pops up a lot in historical photographs.

The India Gate is sort of like India’s Tomb of the Unknown Solider (though it’s reminiscent of France’s Arc de Triumphe). It honors all the Indian soldiers that served in (mainly) British wars of the early 20th century. It’s huge, beautiful and impressive. It’s always guarded by Indian soldiers. It centers India’s capital area with Parliament in the distance.

A bit later in the day, we went to the Lotus Temple. It is the hub of the Ba’hai faith, so it’s not just crowded with tourists but also Ba’hai.

Even though it was built only in 1986, it’s a truly beautiful place of religious architecture. It’s also a reminder of how many major world religions have their roots in India.

The country is known for Hinduism. But it’s also home to Buddhism, Sikhism, Jainism and Ba’hai – all of which have millions of adherents. India also has deep connections to Islam – and a connection to Christianity that dates back to the Apostles.

Here’s the walk up to the Lotus Temple –

Here’s looking back at the walk up to the Temple. This is actually a perfect picture of the crowded chaos of India…that functions surprisingly well. The Temple was very crowded but also very efficient.

Once you enter the Temple, you have a few minutes to walk and hang out. The Temple is in active use but they are very open to visitors.

There are some historic sites that if they were somewhere else would be world-famous. They are incredible sites overshadowed by an even grander neighbor. Bill Bryson talks about this in his book on England – there are so many sites in England that are completely unknown solely because they are in England. If the same site was in Iowa – the whole world would be traveling to see it.

Humayan’s Tomb is one of those sites. It’s a magnificent, significant historic site – that is in very good condition despite being located in Central Delhi. And yet – I at least had never heard of it – probably because it’s only a few miles from the Taj Mahal.

Even though Humayan has the largest and most famous tomb – there are several other monuments and tombs throughout the grounds.

Here’s the tomb of Issa Khan –

Unfortunately, we did not have a professional guide, but the guards were very kind to show us around and even take us up on the walls.

The whole structure was built not only for burial, but also defense. It got tight in some places.

Humayan’s Tomb is in the back of the grounds – and involves a bit of a walk.

Humayan was a Mughal emperor who followed Islam. The tomb itself was built at a high point in Islamic architecture and engineering. The detail and beauty was everywhere. You could spend time studying the smallest window.

Or step back and admire the symmetry of the entire grounds.

The site is in good condition with a small museum. However, they are supposed to renovate and upgrade the facilities soon. I hope to go back and see the site again (not in the summer though).

The next day, we traveled a couple hours southeast of Delhi to Agra. Back in the day, Agra was one of the most powerful cities in India. It’s also the tourist city in India since it has the Taj Mahal.

But it’s not just the Taj – Agra also has the Red Fort (best known from Sherlock Holmes’ Sign of Four). We didn’t budget quiet enough time to see it, but it’s enormous. I was able to get a quick shot outside the main gates.

But the main site was the Taj Mahal. The last time I felt this surreal was when I got up close with the Statue of Liberty.

It’s one of those places that you see so much in every book, film and image that it’s weird to be there.

I don’t have pictures that can do justice to the millions of professional pictures online. But – it was so interesting to see the Taj up close and in context.

It sits on massive manicured grounds. It’s also flanked by mosques that are beautiful in their own right.

The site is crowded and chaotic – but the huge grounds soaks up the craziness and it’s still feasible to carve out your own space to see the place from every angle.

I’m partial to hipster-tourist arguments that you should check out lesser-known places and “head off the beaten path.” However, the most famous tourist sites in the world are almost always that famous for a reason. Even though our main event was in Bengaluru, and even though we were crunched for time, I am so glad we fought the crowds and saw India’s big tourist sites. If you’re in India, go to the Taj. Outside, it’s a tourist trap – but inside, it’s still the Taj Mahal.

Get someone you trust to recommend a guide beforehand. They’ll not only tell you what you’re looking at – they’ll solve all the ridiculous tourist trap problems (fees, rules, hawkers, over-important officials, etc) and make your experience 1000% better.

Do some crash course history beforehand. Even something like a few Wikipedia articles makes things so much clearer. Bonus points for a book or a YouTube series.

Plan your visit well – all the places we went to did not have the typical Western-style facilities. There’s no convenient restrooms, vendors or signage. While we figured everything out fine – but a couple extra water bottles, granola bars & Tylenol would have made the experience better.

Delhi is hot and polluted in June. I say that as someone who lives in Atlanta and grew up in The Philippines. Budget extra time for rest and recovery.

But overall, India’s “big” tourist attractions all exceeded my expectations. It’s one thing to read about places, but it’s another to see them up close in context. India is a long trip, but has so much to see.

Read the posts about traveling in India and my time on an Indian train.