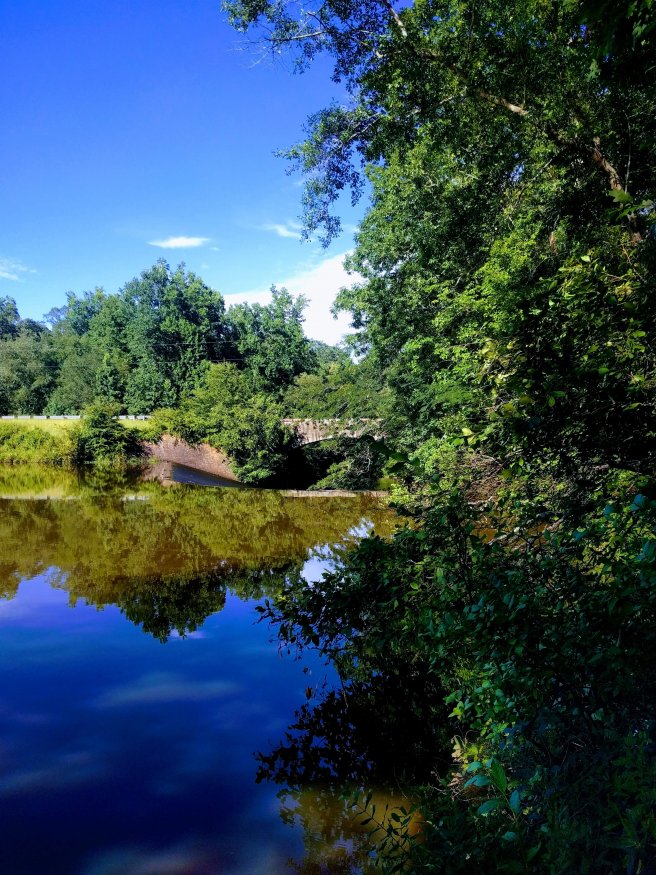 After visiting Vogel State Park, my family and I took another mini-vacation to Hard Labor Creek State Park in July 2017.

Hard Labor Creek State Park is one of Georgia’s most historic and most well-known State Parks.

It’s well-known mainly for its golf course. The golf course is great – I’ve played several rounds there – but the park is so much more.

Hard Labor Creek began as part of President Roosevelt’s conservation program in the 1930s. The Federal Government was buying up “cut-over, abused, and sub-marginal” lands and setting up demonstration areas to show local citizens how land could be restored to productive use.

The entire park was built out by the Civilian Conservation Corps and was actually designed by the National Park Service. The park was turned over to the State of Georgia in 1946.

*Aside – if you are interested in the full story, I highly recommend the book Rightful Heritage: Franklin D. Roosevelt and the Land of America.

You can tell that the park is old – but very well designed. It has that 1930s “park rustic” feel. It has amazing views, diverse wildlife, and many acres to explore.

Sadly, the State of Georgia did not keep the park in a state of good repair for many years. And a lot of the “investments” in the 70’s / 80’s / 90’s covered over the thoughtful work of the Civilian Conservation Corps. You can still spot hand carved granite blocks underneath the lower asphalt parking lot. The group camps are not available for rent – and some of the cabins, while fine, show quite a bit of age.

But – after the 2008 recession, the State of Georgia started treating our State Parks like the assets they are. And though they still don’t have the funding to achieve peak state of good repair, they are thoughtfully and sustainably investing in the Parks again.

Hard Labor Creek has several new, renovated cabins along with mini-golf, a better store, updated recreational equipment, maintained trails, and historic markers that tell the story of the park from its CCC heritage.

Plus – it’s only an hour from Atlanta, straight down I-20. We decided to visit right in the heat of the Georgia summer in July.

And it turns out that we had nearly the entire park to ourselves. There were a few day use folks and a few RV campers – but the park was so low-key and so nice. It is definitely a place to return to.

Like Vogel, Fort Mountain and others – the huge benefit of a cabin / campsite in a State Park is that you are right there in the park among all sorts of outdoor recreation. It’s also cheap and so much more chill than an AirBnB or privately owned cabin somewhere.

For our trip, we stayed in a cabin all the way in the back, overlooking Lake Brantley. The park still has the older cabins available, so you have to look for the “deluxe” or newly renovated ones if you want a bit more nice-ness for a bit more money per night.

Compared to Vogel State Park, these cabins were huge. They had tons of square footage with a large screened in porch. As at other cabins, there were plenty of basics like kitchen utensils and bedding.

The cabins have no WiFi and limited cell coverage. As someone who works on the Internet all day, everyday – the forced break was a welcome change. We downloaded some stuff off NetFlix, but generally spent the time reading, chatting, writing and being outdoors. The TV has a very basic cable package on it.

The cabin porch opens up to Lake Brantley – the smaller of the two lakes in the park. The area was safe for kids to ramble around. There was a grill and fire ring around the side.

There are a couple nature trails that wind through a creek tributary to Lake Brantley. They are short and kid-friendly, but also feature plenty of wildlife and tree diversity. The trees are second growth forest and feature species planted by the CCC according to a nursery plan written by the Forest Service. There are plenty of hardwoods and one super-old Tulip Poplar.

There’s a little beaver pond as well. The trail does wind by some wetlands, so mosquito spray is essential in the summer.

The park also has 20+ miles of equestrian trails that wind to the most remote areas of the park. On weekends, they are limited to equestrians. During the week, they are open to hikers. The terrain is interesting and varied for the Georgia Piedmont. Several lake views and lots of tree and bird spotting opportunities.

The park has a mini golf course right at the park office. The holes are all kid-friendly and ADA accessible. During the week, you can pretty much have it to yourself.

There is a swimming area in the back of the park at Lake Rutledge. It gets some day use – but was never crowded for us, even in the height of the summer. The beach is nice and clean. The water goes out to around 5 feet at the buoy. It’s kid-friendly and beautiful during summer.

Hard Labor Creek State Park is an amazing asset for Georgia. I hope that the Department of Natural Resources keeps re-investing in the park.

Be sure to show your support by visiting Hard Labor Creek State Park, enjoying the park, and joining Friends of Georgia State Parks.