You are here: Home / Experiences / Attending The Global Climate Strike in Atlanta 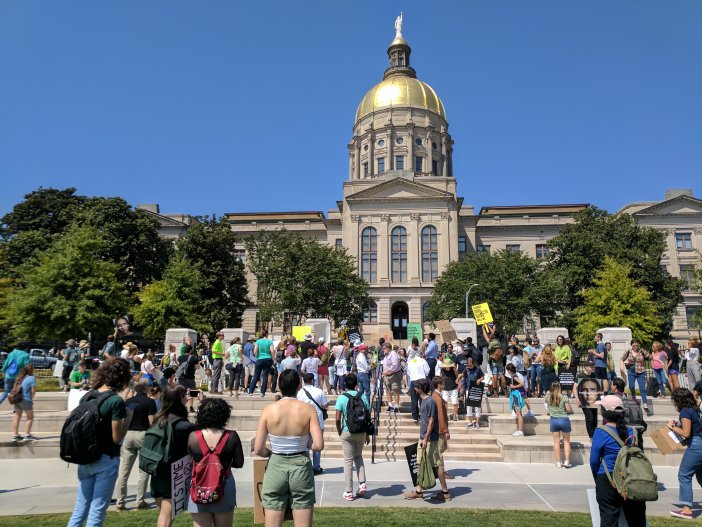 I got to attend the Global Climate Strike in Atlanta on September 20th 2019.

It was the first protest that I had ever attended or participated in. It was a really interesting experience. I had no idea what to expect. I knew that the global protests were going to be huge (and they were). But I had no idea what the turnout would be like in Atlanta, the “Sultan of Sprawl” and poster-child for unsustainable land use & carbon footprint.

Technically, the march I attended was the the pre-march to the student march. The pre-march was organized by a leader from the Climate Reality Project (founded by Al Gore and the National Wildlife Foundation).

The student march ended up being much larger, but even the pre-march turned out more than 300+ people on a (very) hot Friday at Noon in September. Within the confines of the sidewalks, it felt substantial but also somewhat underwhelming.

However, the diversity of the crowd was the aspect that was overwhelming. I don’t think I’ve ever been in a more random group of people in my life. The diversity was important since it’s obvious that while the climate crisis will affect some more than others – it will affect everyone. And it’s going to take political will across age demographics, racial demographics, economic classes, career paths, and much much more.

The march started at City Hall. We went up to the block in front of the Georgia Public Service Commission, the regulators for Georgia’s utilities, and heard speeches. No one came out, but there was attention drawn. Hopefully they’ll move forward faster with Georgia Power’s solar projects.

We then marched to Liberty Plaza in front of the Georgia State Capitol (see intro image), and heard more speeches before merging with the the forming student march, which started a few minutes later.

So – was it worth the trip and the few dollars that I spent on my sign*?

*One side said – “Make Georgia Cleaner, Greener, Richer, Better” and the other side said – “The HEAT, my god, THE HEAT” (Seinfeld reference)

Absolutely yes – for a couple of reasons.

First, protests work…but not for the reasons you think. Going made me, everyone there, and everyone who agrees with us create more solidarity and create more motivation to push for effective change through lobbying, coalition building, running candidates, and voting.

Second, it was a fun, novel, interesting experience. Americans take deep pride in our right to peacefully assemble, protest, and express our grievances. It started to feel weird teaching my children why that right is so important…when I hadn’t actually done it myself. It felt like one of those things that is great when other people do it, but you personally never get around to it…but when it comes down to it, you really should just go do it.

Well, this protest was that “just go do it” piece, especially after the latest round of IPCC reports moved my priorities a bit.

All these charts have been in the news everywhere. But I thought it’d be useful to have them on my site to help re-explain to myself, even if no one ever reads this post.

First, total CO2 in the atmosphere keeps rising when it’s supposed to be going down. I still remember watching Inconvenient Truth in 2006 talk about 400ppm – and how we can’t breach that for the sake of our great grandchildren. Well…we sort of blew past that.

That CO2 has a “forcing effect” of global warming, which will be unevenly distributed across the world. To help scientists unify datasets, the IPCC has 4 different pathways for total carbon dioxide based on predictions on how humans will act. RCP 8.5 means we just keep going to town with carbon. RCP 2.6 means that we have a World War II scale rollback of everything in the next 12 years. The emissions in the above chart put us on the RCP 8.5 path below.

Those CO2 projections will create the results listed in the range below. We know this is right because, one, greenhouse gases are super-basic high school level science; two, this is like the most studied thing in science ever; third, the original, very rough projections from Scenario B laid out back in 1988 are pretty much spot on given the research NASA was working with.

Now, with RCP 8.5, we aren’t talking about our great grandchildren like Al Gore mentioned in Inconvenient Truth – we are talking about, like, me.

The effect of RCP 8.5 is not good. Like, 4C above pre-industrial levels equals trees in Antarctica. 2C change by 2050 is life & species altering. Even 1.5C leads to incomprehensible and fully avoidable human suffering. And to have 5C (aka humans all migrate to the Arctic to survive) even a sliver in the range of possibilities is unspeakable. That is so deeply beyond NOT good that it’s hard to wrap a human mind around it.

It’s not a future that I want to see on any level. It’s a potential future that I haven’t fully appreciated until now…even though I’ve heard and understood climate change as a concept since the early 2000s.

But, those pathways are still based on predictions on how humans will act. If enough people act, a different future can play out. Protesting is part of that.

Next time a protest is near you that you believe in, go check it out. It’s not just an American thing, but as we’ve seen in Hong Kong, Nicaragua, Chile, and so many other places in 2019, it’s a human dignity thing. It’s also fun & awesome. Highly recommended.